Surfing behind a boat with Kelowna Boat Rentals

Okanagan Lake, Things to do, watersport

Wakesurfing is a water sport in which a rider trails behind a boat, riding the boat’s wake, without being directly pulled by the boat.
You get up on the wake, typically using tow rope to pull you out of the water. More advanced riders will start on the swim platform with their board resting on the edge and once the boat is up to speed the rider will ease themselves back until the find the “sweet spot” of the wave. Once the sweet spot is found the rider can let go of the rope and continue to surf hands free. In general wakesurfing is done by using special boards, designed specifically for wakes. Wake surfs range from 4’6 – 6′ whereas surfboards for the ocean range from 6′ – 12′.
The boats that are preferred are tournament boats, which are inboard ski boats with direct drives as the propeller is under the boat, it is nearly impossible for the rider to make contact with the propellor. These boats are also made so that you can hold extra ballast systems, such as water, lead weights, concrete, or other heavy objects in different sections of the boat in order to weigh the boat down and create a larger wake. The ideal wake for surfing is created by positioning people and ballasts throughout the boat with the majority of the weight being in the back and on the side that is being surfed. The deeper the boat sits in the water the bigger and better the wake. When surfing, you only need to travel at about 12 mph making it very laid back and fun for all ages!

Beside the technical aspect (and most importantly) this sport is just a lot of fun when you get the hang of it suited for all ages and it really is not as hard as it seems.

I have gotten this off Wikepedia:

Many riders perform a wide array of maneuvers or specifically-named ‘tricks’ while wakesurfing, with most owing their origins to surfing, skating (both vert and street) and snowboarding, Some of the most well-known tricks are:

3 Ways to keep cool this weekend in the Okanagan

Okanagan Lake, Things to do

With the temperature set to be reaching the low 30’s in Kelowna this weekend for the first time in a while we thought it was only appropriate to layout some fun and useful ways to keep cool when the weather gets hot! 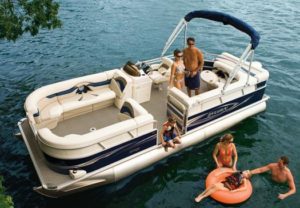 A pontoon boat rental is the best way to get all your friends and family together for an unforgettable time exploring the Okanagan. While on your pontoon tour you will see unparalleled views of iconic Okanagan landmarks such as Mission Hill Winery, Rattlesnake Island, and the W.R Bennett Bridge. Luckily the pontoon boat offers plenty of shade during the day, but if one is still unable to beat the heat, one can simply jump over the edge of the boat and be immersed in the all encompassing lake!

Tubing in the Okanagan behind a powerboat is one of the most exhilerating ways to keep cool on a hot summer day. Whether you are pushing the limits of the boat, or putting yourself in a more comfortable lounging position, the tube offers something for everyone young or old. One can stay dry if they want to, but as long as the temperature stays up it is more than likely that the rider will find themselves in the water. The tube rider is in the hands of the boat driver, as long as two parties are on the same page, a good time is guaranteed for all!

Nothing says committing to getting wet like water skiiing. More often than not, it starts in the water and ends in the water. Again, the person driving the boat and the person being towed need to work together to make this work. It may appear quite challenging, but as long as the driver has the skier lined up and ready when the throttle is dropped, the skier will be out of the water in no time with hair flowing in the wind and a smile on their face! Instructions on how to get out of the water on skis to follow.