(Description Provided by http://www.env.gov.bc.ca/bcparks/explore/parkpgs/ellison/)
Nestled on the northeastern shore of Okanagan Lake, Ellison Provincial Park includes 220 hectares of forested benchlands above a rocky shoreline of scenic headlands and sheltered coves.

The park’s natural attractions, combined with the dry, sunny Okanagan climate provide many recreational opportunities from spring through fall. Hiking trails along the scenic headlands are steep and require care and attention. 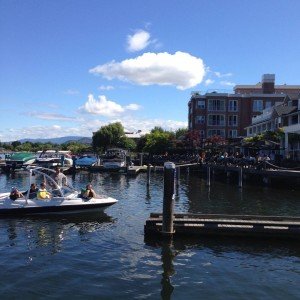 Kelowna is the heart of the Okanagan, and boating in Kelowna is the most popular destination in the entire valley. Kelowna’s downtown core sits on the edge of Okanagan Lake which makes it the main hub for boating in the Central Okanagan. In the beating heart of Kelowna is Water Street Boat Launch. Parking can be difficult to find downtown on certain days, especially with a trailer, but this contributes to the smoothest flowing boat launch in Kelowna. This launch is ideal for anyone staying in the downtown area and that is not concerned about finding parking. If you want to start your day in the heart of Kelowna, this is the spot!

City Park is also within walking distance of both Bernard street and Kelowna Yacht Club. City Park is known for its beach as well as their water park and various activity areas including basketball and volleyball. It is an ideal place for swimming as well as other activity it has to offer.

Along with the various activities Kelowna has to offer, there are many other spots near Kelowna which offer both services and exploration. One of the most thrilling spots is the William R. Bennett Bridge, which connects Kelowna and West Kelowna. Boaters will find enjoyment in driving under the pontoon bridge to get to their destination.

Flow – This launch offers a very small staging area and is strictly enforced by city parking officials, be sure to follow signage to avoid litigation. The lack of onsite trailer parking increases overall flow.

Mooring Space – Three floating docks or five sides for mooring – with the north side allowing free temporary moorage for up to two hours. The only setback is that boats moored inline with the ramps can cause disturbance to water traffic engaging in unloading and loading trailers.

Penticton is one of the greatest places to boat in the Okanagan. Penticton sits in a rich tourist community, from the shores of Okanagan Lake Beach, to the small winery community of Naramata and also the various parks of Summerland. Penticton’s beautiful beachfront houses various restaurants as well as nearby downtown with many shops and services. Penticton Yacht Club also sits on eastern shores of Okanagan Lake Beach, which has many great boating services including two boat launches, fueling & docking station and also access to general facilities. Check out www.pycmarina.com for visitor’s moorage which is available on a daily, weekly or monthly basis or call (250) 770-2000 for rates or reservations.

Alongside the South Okanagan’s east shores lies the small community of Naramata, home to many wineries which is great for wine tasting and dining during the warm summer evenings. Along with excellent wineries Naramata has an excellent community for tourism as well as a yacht club to dock your boat and visit the small beach community.

Across the lake from Naramata there are many parks, beaches and boat launches in Summerland including Peach Orchard Park, Sun Oka Beach and Kickininee Provincial Park. These parks include docks which you can enjoy swimming or have lunch on the beach. Kickininee Park also has a boat launch for easy access to load and unload boats while saving the time to drive into Penticton if coming from Summerland.

Penticton Marina is at the Southern most end of Okanagan Lake in Penticton. The marina has all the amenities. Check out www.pycmarina.com for visitor’s moorage which is available on a daily, weekly or monthly basis or call (250) 770-2000 for rates or reservations.

The Blue Herron is the only place in Vernon that you will find a full service boating option. They offer moorage for their guests if one chooses to fill up on food at the restaurant. While, if you are concerned about the journey back or as just a little low from touring all day, the Herron offers a gas dock to ensure you will get to where you want to go. 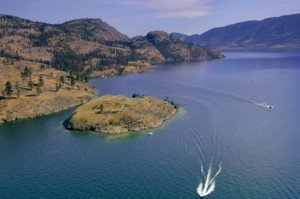 Squally Point is located 2km south of Rattlesnake Island.
Just south of Squally point there is a cove with the best cliff jumping in the Okanagan. There are two different tried and tested spots for jumpers. The smaller jump spot is an island with a rope on the backside to help assist in the climb. The other spot can be accessed to the left of this island. It can also be a little tricky to climb so if venturing be very cautious, and if you have physical limitations stay in the boat. When at the cliffs, be sure to keep boats clear of areas where swimmers and jumpers are and may be landing.